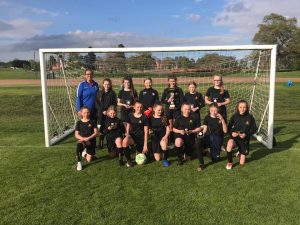 A fantastic game of football took place on 4 May 2019 at Rockliffe Park between Trinity Year 7 girls v Acklam Grange in the Middlesbrough Schools Cup Final, with both teams very excited to be playing at such a prestigious venue.

The game started very competitively, with both teams creating early chances, and the first goal came through some great link up play from Trinity and scored by P.Bennett. Acklam Grange threatened and created some great attacking play, but were caught out by a Trinity break and R.McCarthy scored goal of the game with a shot from 20 yards. With strong challenges from both teams and a great save from M.McCormick the score remained at 2-0 at half time.

In the second half of the match Trinity came out strongly and F.Mcpherson made it 3-0 after a receiving a killer pass from J.Kilkenny.  C.McMann moved onto the right wing, excelling with quick touches and creating many chances.  She scored two goals in quick succession putting Trinity into a 5-0 lead.

The defenders L.Winstanley, M.Gibson and A.Holloway were fantastic throughout the game, with very solid performances of which they should be extremely proud.

The player of the match R.McCarthy, who thoroughly deserved the accolade for her performance, finished the game with a hat trick.

Everyone played their part and a well done to A.Gomez, T.Keogh, S.Harrison and M.Muthana who were also in the squad.

The score line did not reflect what a great performance the Acklam Grange Girls’ put in and they should be very proud of themselves and how they represented their school in such a thrilling match.