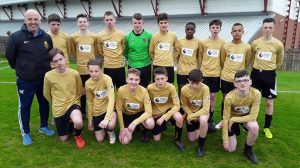 Unfortunately our Y9 boys ended up as Runners Up in the MSFA Town Cup Final v Nunthorpe. Despite taking the lead via Tom L the team couldn’t quite hold on and conceded a penalty which was scored with 7 minutes remaining.   In extra time, although there were chances to win the game, including a penalty, Trinity could not unfortunately find the winner. The lottery of a penalty shoot out then loomed with Nunthorpe emerging as the victorious team.   Well done to both sets of players for a great final.

Well done to our Y9 team who finished as League Champions and Cup Runners Up – a really successful season!!!